My alt and profession priorities for Legion → 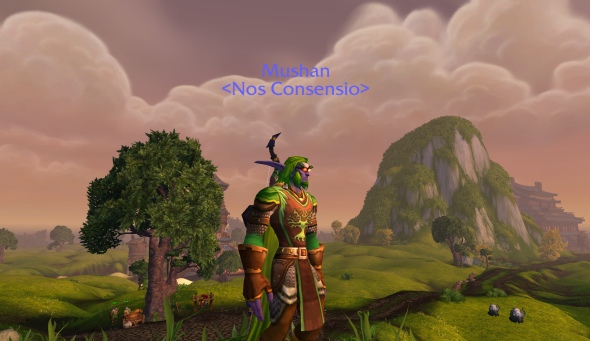 “Thou shalt have three suits of Lincoln Green each year, and forty marks in pay.”

In days of old, I spent my time in pursuits of a more innocent nature: hunting beasts for meat and skins, working with leather, fishing, cooking, reading, honing my skills with a bow, and enjoying my life in peace.

Many of the most recent years have, however, been filled with war. War against the scourge, the sha, the Legion, the orcish Horde, the mantid, the mogu, the old gods. Restless ghosts and corrupted dragons and beasts and humans and trolls and elves, and seemingly every other humanoid or other such foes.

I am tired of war.

I came back from Draenor bored, exhausted, and disgusted. I shut down for a long while at my farm in the Valley of the Four Winds, numbing my thoughts and feelings with drink and contemplating retirement from… well, I’m not sure I should say.

The dwarves and pandaren seem to have no problem handling their brews.

I, on the other hand, am simply a moody, cynical drunk. After weeks at the farm – drowning in suds – I felt no less exhausted or downcast than I did the night I arrived, until one morning I awoke and decided to simply stop drinking.

My life changed immediately: my outlook improved, as did my energy level and my ability to rest and rejuvenate. I ate well and enjoyed the company of my pandaren friends. I shed the burdens of slow suicide and instead took flight, revisiting some of my favorite places on that wondrous continent. I put together a new suit of armor made with materials of the color of trees, and burnished and refurbished my bow. My sister Anacrusa joined me presently, and we hunted together with teeth and claws and arrows; feral nature and marksmanship in harmony. It was a time of revitalization and renewed confidence, and reminded me of my younger days, before the wars.

Then, several weeks ago, the Burning Legion returned.

We each received a summons from King Varian Wrynn, travelling with Alliance forces to The Broken Shore to face the Legion, only to be forcefully rejected by Gul’dan. We lost Tirion; we lost the King, along with untold numbers of Alliance soldiers. We worked in concert with the Horde until the very end, but we were overmatched. Ana, who maintains contact with druids all over Azeroth through the Cenarion Circle, learned from tauren and troll druids that the Horde also lost their leader, Vol’jin, and had at least as bad a time as we did.

Since our return, young Anduin Wrynn has ascended to the throne of Stormwind, and the druids report that Sylvanas Windrunner is now the Warchief of the Horde. The Kirin Tor moved Dalaran back to the Eastern Kingdoms temporarily, and we accompanied Archmage Khadgar to Kharazan, where he searched for any knowledge that might aid us against the Legion. The result of his efforts has Dalaran preparing to blink once more, this time to the Broken Isles. I have never been there.

Lady Jaina Proudmore cannot get past her grief and anger at the Horde, and has, to my knowledge, left the Kirin Tor. Dalaran will be whole again under Khadgar’s vision, with Horde rejoining Alliance in that vaunted floating city, but Jaina could not abide the Council’s vote to make it so, and excused herself from our efforts. I am hopeful that she will return to us in some capacity, for I am certain that Khadgar is correct: we need to stand together in our combined strength, in order to save the world.

If I haven’t been clear enough thus far in this journal entry, I am a man of peace. I believe that most in the Horde are good, and I wish that we didn’t seem to be constantly in a state of war with them.

The Legion has begun attacking Azeroth. We have fought off demons outside Stormwind and Orgrimmar, Ironforge and Undercity, in Dalaran, and in other parts of the world. So far they have been vanquished, but only temporarily; they soon return again as if arriving for the first time.

Last night, I was in Tarren Mill. We fought off the Legion and cleaned up the entirety of Hillsbrad. In the process of doing so, I revisited the ruins of Southshore. I had to pause.

Where great things happen no more.

Until a few years ago, this was a port, a town with men, women and children who lived and grew and worked hard to have a life. It was the last remnant of old Lordaeron. Sylvanas Windrunner destroyed it.

I have seen Sylvanas on several occasions. For a banshee, she still looks like an elf. A dead, cold, reanimated elf, who gave herself over to revenge and calculated, brutal destructiveness and cruelty. Countless innocent people have suffered from her particularly heinous methods of war. She didn’t simply bring war on Southshore: she brought the plague upon it.

The above photo is all of the evidence necessary to say these things with certainty.

In talking with greener members of the younger races in the Alliance recently, I’ve found some who have a particular fascination with Sylvanas. They find her attractive and mysterious, both “hot” and “cool,” as they say from time to time. Some of these young ones are Alliance soldiers.

I find her to be none of these things. She is a Ranger General, and I respect her skills and acumen. They are necessary, and should prove valuable to the efforts against the Legion in this desperate fight for the future of our world.

She is an ally in this war. I will fight in concert with her. I will do whatever I can to ensure we are victorious. However, I must strongly disabuse those who want to cozy up to her of their delusions.

Southshore. It lies in ruins, fouled by stench and ichor and vile green pools. Its families are deceased – or, worse, they have been raised in undeath. Which is not “cool,” though it is most certainly cold.

(This does not excuse certain actions of the Alliance, of course. The burning of Camp Taurajo comes to mind, for instance. I am still angry about that tragedy.)

Today I am back in Pandaria, where I keep my hearthstone. I expect to hear from Khadgar or the Alliance any day now. I will go where I am needed as I can. I will fight alongside our allies, including the warchief if necessary. For now, Sylvanas…

But I will not forget what one finds these days at the ruins of Southshore. I will not trust her or cater to her like a blithering fool.

For, if we are able to escape extinction at the hands of the Burning Legion, will we celebrate together, and then work to mend the world and our relationships, and build a better future?

No, we will collectively return to our petty wars at the cost of more innocent lives, and the decimation of our military strength against future threats to our existence.

And I want no part in that. Wrathion be damned.

(OOC: Plans have changed, and Mushan the Marksmanship Hunter will be my first toon in Legion! I hope you found this post mildly entertaining… thanks for reading, and have fun!)