Revisiting Outland with a new hunter 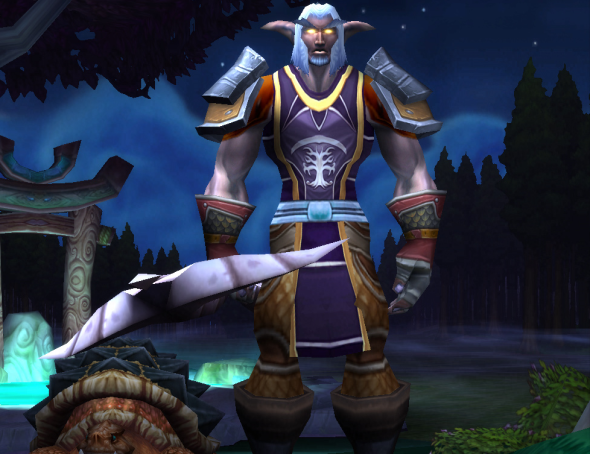 In my “free time” – which, in World of Warcraft, generally constitutes time spent “not advancing” my level 90 characters or professions in some shape or form – lately, I’ve been leveling a new hunter.

Now, there is no need for me to make a new hunter, at least for the sake of hunters per se. I already have three hunters on my realm, and two of them are max level. However, I do love the class, and so when the time came to work on a new project, it was a fairly easy choice for me.

Anyway, I’ve got this new hunter. And this hunter has a purpose. Due to this purpose, it’s extremely likely that he will never reach max level.

If I think about the history of my experience in WoW, with an eye toward my favorite parts of the leveling experience, something interesting happens.

Some people love(d) Vanilla WoW. And, the truth is, I did too; I didn’t start playing WoW until the month after TBC launched, but I did spend a ton of time leveling through the “Vanilla” parts of the game when I started playing – I didn’t have my first level 70 toon until just over a month before Wrath launched! And while there were frustrating and faulty aspects of that part of the game, I have a lot of good – fuzzy, but good – memories from that time.

However, that part of the game is gone. Forever.

As such – and this is the interesting thing that I realized – the earliest “nostalgia-era” content that is still available in anything collectively resembling its original form is The Burning Crusade. And Wrath follows that, of course… and those two zones are the reasons that I made this new hunter.

If you’ve read some of my previous posts, as well as some of those from before, you may know that I’m at something of a crisis point as far as the game goes with me. A lot of times, what’s needed in these situations is a break from the everyday endgame experience (or lack thereof), and that’s what I’ve been looking for lately. Looking at the game, I realized recently that I had no characters that could play in Outland at-level – seven 90s, an 85, and two toons at or below 30. One of those lowbies is a hunter, and the other a shaman. I don’t enjoy the shaman as much as I had hoped, and the other hunter is reserved for a different project, should I ever return to it.

Anyway, I decided that, while I’m not a fan of leveling the revamped content on Azeroth, I wanted to take another toon into Outland and Northrend… and I didn’t feel like leveling a second DK (not that that isn’t fun, but my DK is the last toon I leveled, so I’d like to give DKs a bit of a rest for the moment). So, hunter it was.

When I look back at the past few years and think about the toons I’ve brought to max level, starting with Mushan and including a (now deleted) mage, warrior, replacement mage, second hunter, and DK, I realized that my favorite zones to revisit during the leveling process are Outland and Northrend. They were the continents/expansions that I played before I raided, which means “back when I sucked.” Back when I had no idea what was going on, or how to play. Back when the world was a complete wonder to me. When things were scary and new.

For some reason, nostalgia brings me back to those zones, to those expansions’ content. To a simpler time. That’s the number one reason. The revamped Vanilla content was okay for the first play-through, but there are certain aspects to the leveling process that make the experience uninteresting to me, including the lack of virtually any challenges along the way and the updating of the content to the current-as-of-Cataclysm time period.

I’ve set some parameters to encourage discovery, exploration, and learning… and also to ensure that I do not simply blow through to the higher levels like I usually do.

No heirlooms past level 58. I did use several heirlooms through level 57, because the goal here was absolutely to zip through large chunks of the pre-58 content at a time. Once I hit 58, I did away with them, replacing them with quest greens I had saved for exactly that purpose. I even equipped a level 15 (ilvl 22) cloak as I prepared for Outland, because that was the last one I had saved. Not that that mattered – everything has been nerfed, so the simple fact that I had something appropriate equipped in every slot ensured that questing would still be very easy.

I’m also not in a guild, for guild perk reasons (including the bonus XP perk).

Based on past (post-4.0) experience, a player can hit Hellfire, Terrokar, Nagrand, and SMV or Netherstorm, run a couple of dungeons along the way, and easily be 68 (and ready for Northrend) before completing any zones, and skipping the vast majority of the Outland content. My aim with this toon is to spend time in Outland, so skipping content is anathema in that scenario. Therefore, I went to Wowhead and looked up the required levels for quests in each zone. For instance, virtually all of the quests in Hellfire are available by the time players hit 61; thus, when I hit 61, I lock my XP. This means that, once I finish the zone, I can unlock my XP, move on to Zangarmarsh, and continue gaining XP until I get to 62 (when all quests in Zangar become available). Then, when I finish Zangar, I can start Terrokar with unlocked XP and re-lock it again at 64 for Nagrand. This preserves some semblance of “I’m playing at-level,” which is another goal that I have. I could do each zone and run each dungeon without locking XP, but I would quickly outgrow each zone well before I finish it if I did it that way. I’m likely going to spend more time in Outland with my XP locked than unlocked, but that’s ok.

By the way, I discovered the other day that locking XP also interrupts the accrual of “rest,” which, for these purposes, does not disappoint me. Knowing that I won’t be out-leveling a zone quite so fast makes for more fluid progression within the zone than 30 bars of rest would – to a point, of course.

Ground mounts only. Some people may think this is crazy, but I’m determined to play it very much like I did when I first took Anacrusa through it in 2007-08. And I couldn’t fly back then. Taxis (flight paths) are allowed, of course.

Additionally, while I do have a vendor mount, I will not use it with this toon.

There are quests in zones, once you get to a certain point/level, that send you to a dungeon that corresponds with the story; in Hellfire, it’s Hellfire Ramparts. In the interest of playing through the story, I will run the dungeons. However, I will only do this while XP-locked.

It’s fairly clear, at this point, that managing the throttling of XP-gain is a large part of this endeavor. Part of this is an experiment to see how it affects immersion; I’m of the opinion that while going back several times to Stormwind to (un)lock XP is a slight annoyance, it’s no more immersion-breaking than any other non-core activity in the game, such as doing my farms every day on max-level toons, or raiding the same instance every week.

It’s an imperfect science, obviously: there are several aspects of the game that are impossible to recreate. LFD didn’t exist back then, there were group quest elites, stats and specs and talents have been revamped, glyphs have been added, and things have been heavily nerfed. There’s no way to go back 100%, but that’s something I was fully aware of as I began the project.

The goal is to immerse myself in Outland. Revisit and enjoy the lore, and experience it as authentically as possible from a playstyle perspective. Revisit some memories of formative times in my WoW-childhood. There really isn’t a way to completely and accurately replicate that experience any more, but I can do things to mitigate the hyper-leveling paradigm that plagues** old content.

** “Plague” indicating a certain perspective; I know that there are many who are absolutely done with Outland in every way, but I also know that there are a lot of people who love TBC and love spending time there. So for my purposes, leveling quickly is the opposite of what I’m interested in. However, for others, it’s a necessity.

At any rate, along the way, I am taking a lot of screenshots, reading quest text, and completing each zone the best I can.

By the way, I’m leveling as Marksman on this hunter, which is what I leveled Mushan and Ghilleadh with back in the day. I don’t play Marks anymore on those toons, but it is absolutely killer for leveling. I approach the mob. I plant, and (unglyphed) Aim, and Shoot. 95% of the time, the mob either dies from a single shot or is critically injured (and is subsequently finished off with a Kill Shot). For elites or higher-level-than-me mobs, I do the “Aimed/Chimera” combo, and if it doesn’t kill them, it usually does serious damage. Even without heirlooms, the damage is punishing if it crits, and with Careful Aim, that happens quite often…

Playing this way makes me feel more like a ranger than just about anything else in the game. And that’s a fun aspect of this project, too.

As I mentioned above (and in a previous post), there’s no way to 100% accurately replicate the experience of playing WoW or a new expansion for the first time – once you’ve done it, you’ve done it. However, there are ways to revisit it. I’m a leave-my-poor-arms-at-the-emergency-room-afterward raider, but I also love leveling, and I love some of the old parts of the game. It’s fun and relaxing to lose myself in my new character, imagining him seeing this content for the first time and experiencing that wonder and awe with him. I’ve seen it before, but I also like seeing it again. And perhaps I’ll learn something new along the way.

Of course, this dovetails somewhat nicely with the idea that it’s nice to see Outland as it was a couple of years ago on the eve of Warlords of Draenor, since a great deal of that lore (along with that of the relevant books) will be somewhat pertinent to that expansion as well…

Thanks for reading this post by Mushan at Mushan, Etc. Comments are welcome!

7 Comments on “Revisiting Outland with a new hunter”